This series of articles will introduce the reader to explore more about Performance Engineering, specifically how to deal with actual issues of the product in a production deployment scenario.  This is the most discussed area and most of the people I have interacted with look forward to getting in to this role and deal with actual issues and make their contribution.

The reader is expected to look at the problem holistically to make the best use of the resources being deployed and then tune the application to obtain the required performance.

As this spans a multitude of areas, extensive knowledge of all the areas is necessary and this comes mostly by experience.  So, its always advisable for the readers to proactively examine all the available artifacts from which they can draw their own conclusions which can be later compared to the actual solution points to better their understanding.

Finally this is a continuous process and each case provides a unique insight in to ‘what else’ can be done to make the application better and to provide a better customer satisfaction.

With this introduction, let us get in to our first case which is the most recent one which I have worked on.

This particular problem was presented to me with the following symptoms –

To give a brief background, this particular application is responsible for Indexing and Search for the entire data that lives in the entire system.  The design is based on Lucene and is quite dated but has scaled well in the many years of its existence.

The application runs on a JVM with JDK8 on an Oracle Linux VM with 48vCPU and 320GB RAM on the cloud.  The application heap currently stood at 63GB and with the following GC parameters at the time of reporting the problem -

From the above GC parameters, it can be understood that some tuning was performed earlier which worked well until the crash problem + degraded performance started to show.  These were the major issues and inferences after looking at the GC log(s)

These are some of the GC graphs prior to the attempted tuning (more below). All these graphs are courtesy of the website https://gceasy.io. All credits to them! 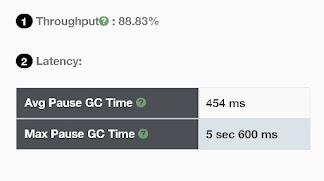 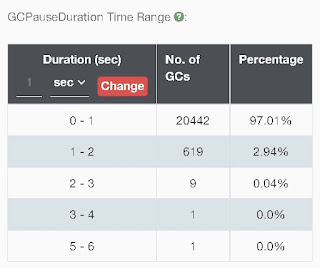 The crash investigation led way to some previously reported issues which involved calls to JNI library, specifically the network at a time when the JVM was busy with GC activity and all the threads are blocked to complete the activity.  The JVM eventually crashed with these errors –

# A fatal error has been detected by the Java Runtime Environment:

# An error report file with more information is saved as:

# If you would like to submit a bug report, please visit:

The code being called in this particular application was pretty old and did not show any possible connections with JNI calls as described.  But it was definitely something to look out for.

With this out of the way, the next thing was to look at the degraded performance of the JVM.  To remediate the problem quickly, based on the prior made observations, the following set of tuning parameters were recommended -

After making the above changes, there was a slight improvement in the performance but was not very consistent.  These are the GC graphs after applying the above parameters - 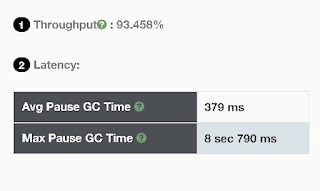 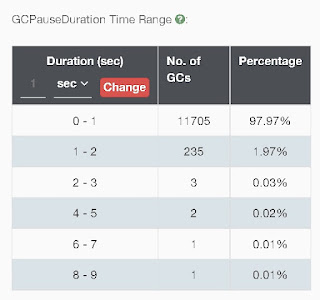 After applying the tuning parameters, in the meanwhile, additional data from NMON was also investigated to understand the amount of additional CPU head room available.  The GC logs were examined in detail to get and understanding and have been categorized as below along with the remedial actions for each of them -

Problem – Lot of regions getting filled up quickly and the threshold is at default of 5%.

This gives more head room for the objects to be alive but it will also have an impact on the overall size of the heap.

Problem – Humongous allocations and the resultant mixed GC’s due to long lived objects.

Proposed Solution – Increase the region size to the next size 8MB.  Although this doesn’t completely solve the issue but it would reduce the fragmentation that would be caused by multiple empty regions and this will finally have a positive effect on the concurrent GC cycles

In the first set of tuning values, the MaxGCPauseMillis was set to a value of 500ms.  Although the overall average added up to this number, the 90th percentile was about 700ms.

The second set of tuning where this value was removed, it defaulted to a value of 200ms.  In this spell, the 90% average was 650ms.

Other parameters, their significance and the path forward

XX:G1ReservePercent=15 – This parameter worked well, and there were no to-space issues, so this can be left as-is

-XX:InitiatingHeapOccupancyPercent=40 – This also didn’t show much impact, so, it either can be left at this number or reduced to the previous number of 30 so that the marking cycle can start early.  This can be taken up later.

Based on the above investigations, firstly the JDK version as reverted to a more stable standardized sub version.

The application of the final recommended GC parameters, stabilized the instance to a great extent and the problem of crashes / degraded performance was not reported.

Conclusion and take away

This article should have provided an overall perspective of dealing with a production incident and the approach that was taken to identifying and root causing the problem and then finally suggesting a remediation.

The tuning options recommended were very specific to this particular use case and usually remain unique for each and every application.  It is up to the engineers working on the problem to take reference of these and then adapt / modify them appropriately for their specific requirement as there is no ‘one size fits all’ concept.  The same problem could have been dealt with a different set of tuning parameters, and this is one of the many approaches and does not necessarily make this the only one solution.  Its up to the engineers who are workign on such problems to be intrigued and invest time in investigation and experiment as much to get things right.

On a closing note, I would like to appreciate the time you have spent to read through this article and I hope it would have provided some insight and a path to deal with such problems.  All the best and I would see you next time with another problem.  Until then, stay tuned!

Popular posts from this blog 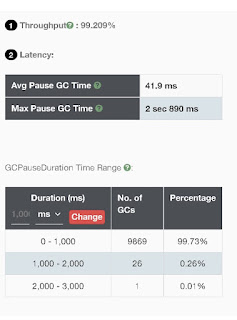 Introduction After all the comments and the feedback from the community which has been much encouraging, this is the second article in the engineering series also aimed at tuning the JVM.  In the first one we had delved deep in to tuning G1GC which can get complex at times depending on the application design and its intended usage.   Background In this article today, we will try to look at simple case of an application running Parallel GC which is primarily used for UI navigation of a complex micro service based system.   Here we are using the terms simple and complex which might sound contradicting, but just to give a birds eye view, this application is primarily used for UI side navigation with internal API based communication with all the supporting micro services.   So, this design is light weight and the heavy lifting is done by the services themselves, so the throughput is quite high and responsiveness is very important. In this context, the immediate thought that would cro
Read more

Introduction This series of articles will introduce the reader to the arena of Performance Engineering.   After my first two blog articles which provided a 35000 feet of what is Performance Engineering is all about, I am sure most of you would be intrigued to understand more about it.   This series of articles should help you get started (in case you would want to take a dive) or would act as a refresher to many who are already in to this domain.   This series aims to discuss the testing aspect of Performance Engineering, how it is done, why it is done and what are the key take away points. Let’s race away by trying to answer the relevant questions What is a load test and why is it needed? After the advent of the internet and specifically the dotcom revolution bought the entire world close to being online.   Applications which were erstwhile desktop started getting connected via the internet.   With extensive development and advancements in the connection technologies, the idea of
Read more